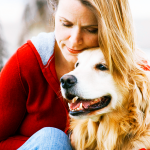 rebecca mandell started dog’s best friend in 2004 when she became increasingly alarmed by the methods utilized by many dog trainers in the south bay, who use combinations of physical domination, “corrections,” yelling, choke, prong or electronic shock collars, and alpha rolls — all of which are not necessary and cause physical and emotional damage to our dogs (read about the negative aspects of using punishment according to the american veterinary society of animal behavior).

as a positive reinforcement dog trainer, rebecca believes in training dogs with compassion and understanding. helping to build the bond between dogs and humans, so the dogs do what we ask of them because they want to, not because they are frightened or intimidated.

she achieves this through the use of rewards such as attention, praise and treats. no force based tools/techniques are ever used. dog’s best friend is strictly positive.

watch a short interview with rebecca (and her dogs, rusty and cooper) about how positive reinforcement works.

rebecca evaluates and trains rescued dogs for the golden retriever club of greater los angeles rescue. she is a member of the association of pet dog trainers (apdt), the international association of animal behavior consultants, truly dog friendly, an international group of positive reinforcement dog trainers fighting against the use of harsh training methods in their profession and the pet professional guild, an organization committed to holistic, force-free methods. rebecca is an approved akc canine good citizen evaluator. dog’s best friend was voted “best dog trainer” in the 2012 south bay locals’ choice awards.

rebecca is a long time resident of hermosa beach, alongside her husband, corey, and golden retriever, chester blue, her loyal puppy training assistant.

what is positive reinforcement